This exhibition explores the strong influence that Giorgio de Chirico had on Daverington as a teenager and the affinity he still feels for de Chirico many years later.

“Over the past twenty years as a painter, both as a street artist and a classical oil painter, I have developed an iconography that includes an interest in perspective and geometry, the illusion of three-dimensions, the landscape, self-portraiture and figuration.
I often mix all of these interests into one single image in the pursuit of complexity - one that is full of quotation and references to art history. In this way I am trying to make visible through painting the experience of space and time.
After many years of not thinking about de Chirico, I noticed that it was he who set me off on my fascination with the checkerboard motif or the tiled floor - a simple solution to achieving perspectival form and depth. Also, I shared an interest in producing pictures within pictures - or worlds within worlds by placing landscapes into geometric forms that defy logical interpretations of space. And, I share de Chirico's later interests in the old masters, figuration and portraiture.
So, it is from this point of view that I set out to make a series of work that discusses this connection that I feel toward one of the greats of 20th century painting.
There is a long history of artists making a homage to other artists. This exhibition is in that tradition. Warhol did a series in the 1980s titled ‘After de Chirico', which explored repetition and the replication of images. Giorgio de Chirico was known to make copies of his own work and produced eighteen versions of ‘The Disquieting Muses’. I found that very exciting because I have also been making copies of my own and others work over the last few years to study the possibilities that are inherent in variations on a single theme, concept or idea.
I think de Chirico tried to compress the world into his paintings, both the outer world and the inner world in an attempt to make an image which spoke not only to the mind but to the soul - the deep space of the imagination as experienced through a lifelong absorption in art. In July this year, at the Metropolitan Museum of Art, I was lucky enough to stumble upon a room full of de Chiricos, which had just been hung that month - it was such a thrill for me to see some of the originals that I have been referencing for this exhibition.”
Peter Daverington, 1 August, 2017

During his stay in Munich Peter has painted a mural in the Werksviertel Mitte: Werk 3, Ateliertrasse 18. For more information, please contact the gallery. 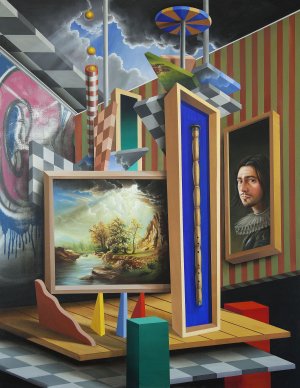 Peter Daverington Self portrait as objects in a room 2017 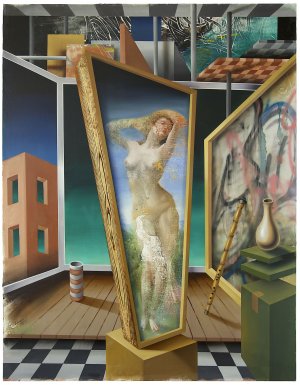 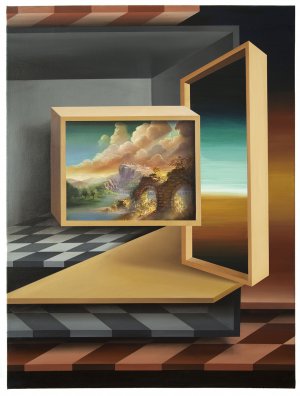 Peter Daverington Room with a view 2017 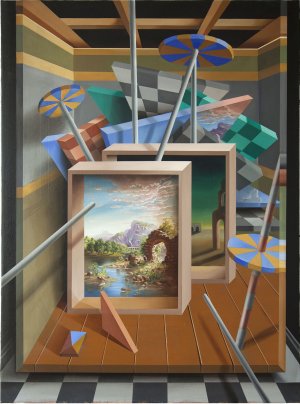 Peter Daverington Cluster in the attic 2017 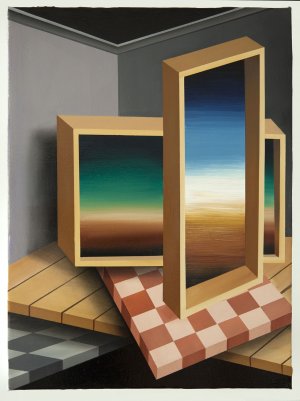