In his exhibition Blue Light, Jonah Gebka incorporates into his paintings reproductions of iconic contemporary landscapes: the preinstalled wallpapers of Apple’s macOS operating system. Since 2013, the US company has been naming new upgrades of its operating system after Californian locations and using their photographs as wallpaper. As a result, seven photographs of Californian natural landmarks have found their way onto the desktops of almost a hundred million macOS users worldwide. Gebka makes use of their recognition value and the familiarity this creates: the photographs, without authorship, have inevitably anchored themselves like iconic representations of bygone eras, into the current viewing habits of many in this age of digital work and life. The most striking example of this casual iconization is Charles O’Rear’s photograph Bliss. Microsoft used it as the desktop background for its Windows XP operating system from 2000. The green hill under a bright blue Californian sky is now considered the most viewed photograph in the world. By referencing Apple’s landscapes through painting, Gebka anchors Blue Light firmly in the digital imagery of the present, but by embedding these landscapes in everyday, almost banal scenes, he undermines their pathos. Gebka captures specific moments in the series: seemingly insurmountable sleeplessness, endless binge-watching just before eyes get heavy and fall shut, or unfulfilled tasks that raise their heads in the middle of the night. The nocturnal scenes are reminiscent of a very specific form of restlessness that is able to keep a tired mind awake despite physical exhaustion. Blue Light refers to the light from screens and displays, which can contribute precisely to this insomnia and its accompanying malaise. A stimulus expansion of cells leads the human brain to believe that it is daytime. Special screen glasses, creams with blue light filters and “night screens” try to ward off this danger, this blue screen hazard. Yet not even these countermeasures can impede the melancholy of Gebka’s series of images, for the constructed scenes evoke a haunting, mournful feeling. By means of painterly layers of sharpness and blur, Gebka creates intimate, private scenes. In their constructed quality they are reminiscent of film or fiction, and at the same time, in their immediacy and randomness, they are very close to many people’s reality. Gebka paints zoomed-in sections on large-format canvases. The nocturnal scenes are magnified as if through a lens, counteracting the theatrical expanse of the Apple landscapes. We don’t know what else is happening in the space Gebka depicts, because the edge of the screen also limits the story being told. What takes place in front of the screen—anonymous backs of heads and profiles of faces, bent elbows in plaid shirts, and pointing hands—seems flat, almost like paper cuttings. The landscapes are painterly, reminiscent of soft watercolors. In contrast, the icons depicted on the screen are almost realistic. These clickable symbols are the crisp moment; they are the gateway to the vastness of the strangely familiar-looking landscape. Around the same time as Blue Light opens, the new macOS upgrade Ventura will be launched, presumably with an abstract graphic as the background of the default setting. Only the name of the upgrade remains a reminiscence of the Californian landscape.

…on such a winter’s day. 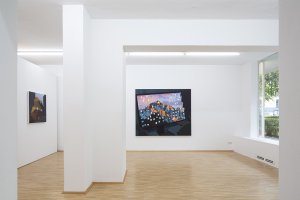 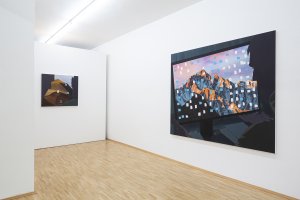 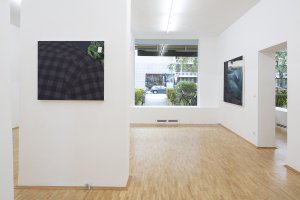 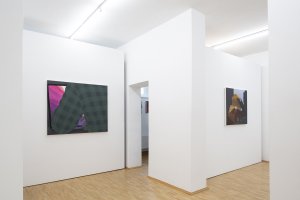 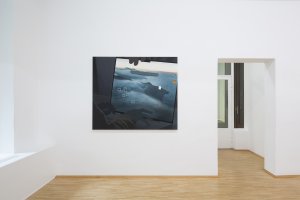 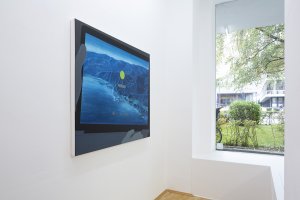 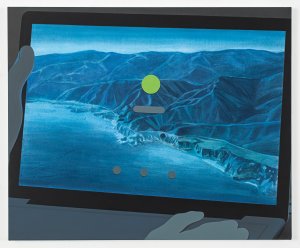 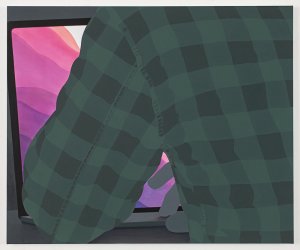 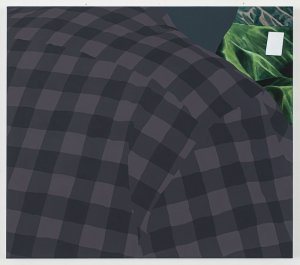 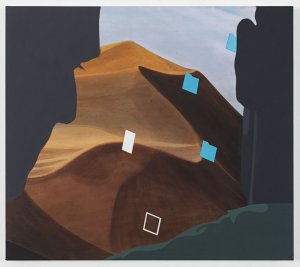 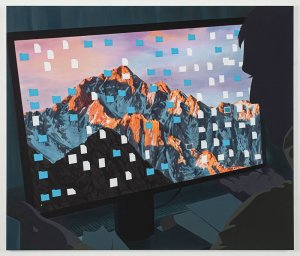 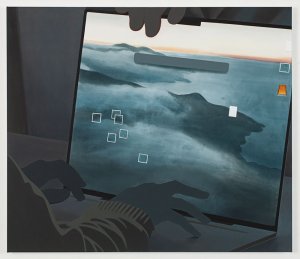 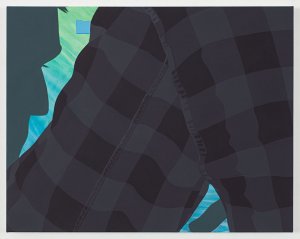 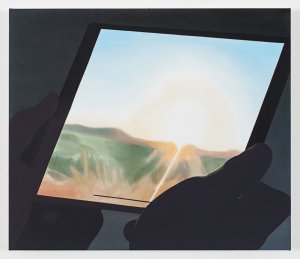